This summer has seen a few new beach bars spring up in Wroclaw, most of which can be found near the zoo. In the shape of Odra Pany however, the city has another open-air beach bar nearer the city centre.

This grubby urban venue is pretty much entirely modeled on similar beach bars in Berlin; indeed almost everything in the place seems to have been imported from across the border – including the German prices and deposit to be paid with every glass.

The bar is strongly characterised by its grungy and mucky appearance, which both helps and hinders in different ways. On one hand it gives the place an edgy, urban esthetic that is unique among the beach bars in the city at the moment. This style very much lends itself to the Berlin 'go and do' attitude where bars and restaurants can be set up in no time in the strangest of locations. However at the same time this dirty and messy bar just feels out of place when you look at the price list. 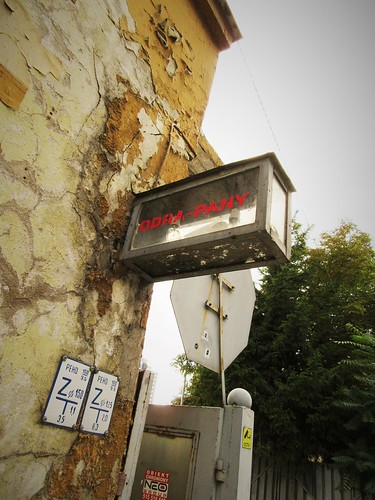 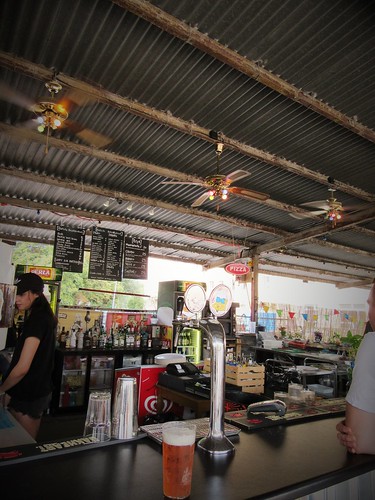 A bottle of the very average Perła pils at Odra Pany costs an astonishing 10zl, making it the same price as a Pilsner Urquell at Literatka on the Rynek . The beer on tap isn't much more affordable either, with a 400ml (yes, no half litre) measure of Zwierzyniec in a plastic glass costing 8zl.

When you do opt for a draught beer or cider, you also have to hand over a 2zl deposit on your glass. This concept is normal in Germany of course, and the system does a very good job of keeping bars clean while staff serve drinks instead of picking up glasses and bottles. However at Odra Pany the deposit only seems to charged on the glasses, meaning the staff still have to go around picking up the empty bottles. Therefore it would seem that the deposit is either in place to stop people stealing their completely ordinary plastic glasses, or to to persuade people to buy a bottle of beer instead. Either way, it seems to be missing the point about why the deposit is a good thing in the first place. 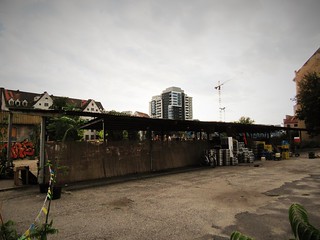 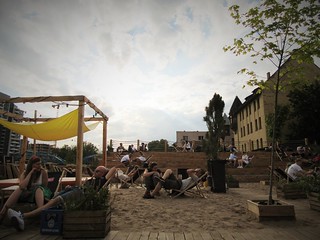 Given those high prices, it comes as little surprise that Odra Pany are suspicious of their customers smuggling in their own booze. To stop people from doing just that, the bar have even employed a bouncer to check bags and handbags for any spare bottles or cans. This system is not just in place in the roudy evenings either, as the bags checks were in operation when we arrived on a lazy Saturday afternoon.

It can be argued that Odra Pany quite rightly want to do what they can to avoid freeloaders taking up space in their bar. While that is all good and well, the likes of Zazoo beach bar and Barbarka have not decided to go down the same road and they are all the better for it. Some women simply do not like the fact that they have a stranger peering into their handbags for no good reason, and it is not a shock to see that one or two people have complained on the Odra Pany Facebook page about the bar's policy. 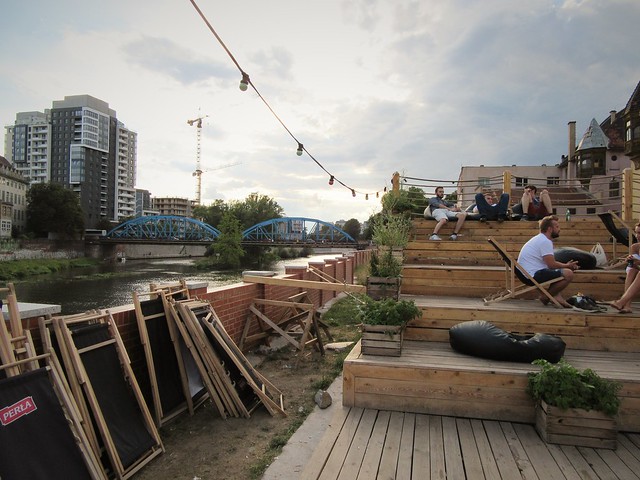 Once you've had your bag checked you can then stroll through the back entrance into the bar itself – a makeshift corragated iron structure that is ugly but also quirky and distinctive at the same time.

Behind the bar the Berlin connotations continue via two pop-art prints from the city, while there is also an open kitchen area where 20zl margherita pizzas are knocked up on a continual basis for the hungry hipsters chilling out on the steps with their Macbooks.

The view from Odra Pany over the river is nonetheless more interesting; the Sikorski bridge is visible on the right and St. Elizabeth's Church can also be seen on the left. The view of the city skyline from the top of the decking is also pretty cool. 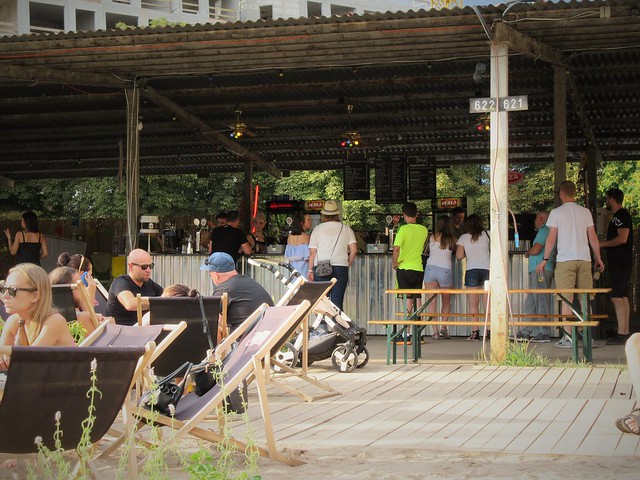 Given Odra Pany's more central location (one tram stop from Jana Pawła II) and unique grungy atmosphere, it should be in a position to crown itself as the city's best beach bar. Sadly though, the edgy vibe and view over the river alone can't save Odra Pany.

Why? It all comes down to the fact the sheer dirtiness in the place, including the bio-hazard toilets, just does not go hand in hand with the bar's smug staff and high prices. It would all be evidently more tolerable and fitting if the place appealed more to the masses rather than the classes.

Odra Pany is the type of venue that could become legendary if it was less prententious and appealed more to Wroclaw's punk crowd. It's exactly the type of bar that should be a haven for 24 hour party people. Instead, what we have is an odd venue with no shortage of narcassists openly happy to pay the same price for a drink in a dirty beach-bar than they would in a swanky old town club. It's such a strange dynamic and when all is said and done, Zazoo beach bar and Barbarka are genuinely superior summer venues.

Odra Pany clearly sets out to replicate Berlin's alternative spirit, and there is no doubting it has the potential to do just that. Unfortunately though, the bar's prices, policies and staff somehow manage to give the place an atmosphere that's more like a pretentious hipster bar from Warsaw's financial district. Given that the pub is rather rough around the edges, that's no mean feat.

Cool and edgy but dirty, pretentious and over priced