Next Saturday evening, Wrocław’s Nadodrze district will once again be lit up with colourful animated murals courtesy of Kinomural 2020.

The kinomural concept was the brainchild of filmmakers Bartek and Piotr Bartos (better known as the Bartos Brothers) and her sister Agata Bartos, produced by the Okoloko foundation.

According to Bartek, the project was borne out of the founders’ discontent with the visual pollution and the great amount of commercial advertisement in the city.

“Many years ago while driving a car around the city with my brother, we found ourselves getting rather p*ssed off with the large-scale advertising banners that are stealing space. So we started imagining how the city could look like if we could replace these banners with some mysterious moving pictures”

During the 1st edition of Kinomural in 2018, the animations were projected on the walls located on Kazimierza Wielkiego and Szewska street.

The project was made possible thanks to support from the City Council, something that the animators are all very grateful for. 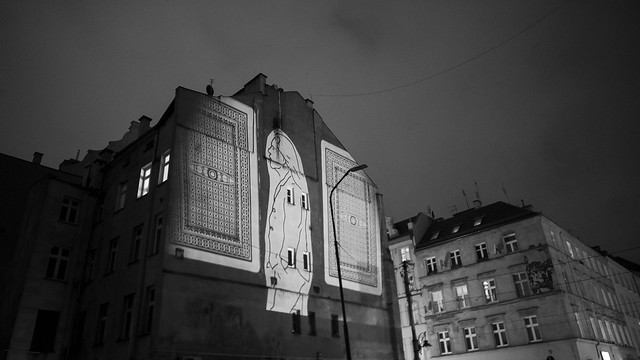 Last year the project then went through a major revamp that saw it increase noticeably in size and scale. As many as 8 buildings were decorated with various murals by 22 artists from 6 different countries. The location was also moved to the Nadodrze district.

Imagine a city whose buildings come to life after dusk, becoming moving pictures. Imagine MOTION MURALS. This is a form of presenting art that has not been known until now: KINOMURAL.

We go beyond studio cinemas and galleries. We transform urban space into works of art available to all. This allows us to take a different look at the places we live in and to integrate the local community on the ground of artistic activities.

The walls of the Nadodrze district will be entrusted to artists from all over the world. They will become canvases for moving pictures. However, these will not be typical graffiti murals, but ephemeral projections in various forms ‒ from video-art through to sound performances, experimental cinema and audio-visual installations.

This year promises to be more of the same, albeit with new artists showcasing fresh designs and animations. For more info, visit the event’s official Facebook Page.