Wrocław has had a few beach bars on the scene for a number of years now, but the summer of 2017 promises to be the year that the beach bar market truly hots up.

On top of the two beach bars near the zoo, three completely new beach bars have either opened or are currently in construction.

Here's a summary of some of the beach bars in town: 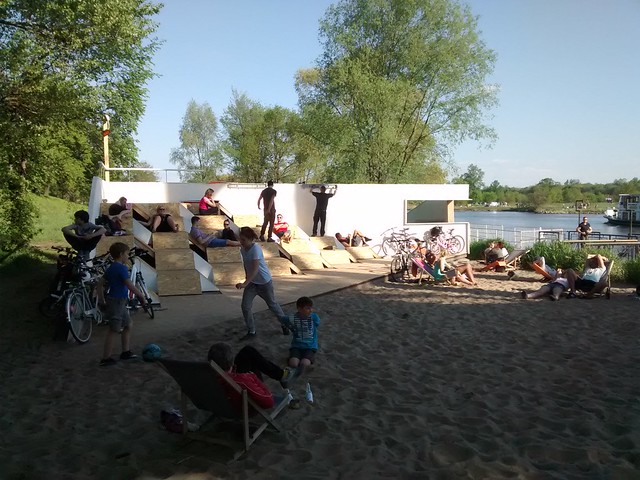 Przystanek Odra – ZOO was the first beach bar to open its doors in 2016 and they are back again this year.

Located by the bridge that links the back entrance of the zoo to Na Grobli street, this small bar sports a cool contemporary seating structure and also offers nice views.

On the flip side, the area around the bar quite frankly reeks of piss and the prices do seem to be inflated given the lack of comfort on offer compared to an old-town bar.

One of two new bars located near Trzebnickie bridge, Stara Odra is set to open this weekend.

Given that the place is so new we haven't had the chance to check it out yet. What we can say though is that location seems to be a good one, so it's no surprise that the next place on our list have also set up shop nearby …

According to their Facebook page, BASEN beach bar opened at the weekend, making it one of the newest spots in town.

The views look very nice according to their photos on social media, while they also do street food in the form of quesadillas.

If you love nothing more than a beach bar this summer, there can be no doubt that both BASEN and Stara Odra are two places worth checking out.

With its prime location nearby Hala Stulecia, the Odra and the zoo, Zazoo attracted large crowds last year and the same can be said so far in 2017.

Last on the list is Hotspot, which when completed, will be the city's (and reportedly Poland's) biggest beach bar.

Run by the same team as Zazoo, the beach bar will cover an massive 15,000sq metres when it opens nearby the Millenium Bridge on the 10th of June.

According to miejscawewroclawiu.pl, Hotspot will be open between 10am-1am and it aims to accomodate both families as well as young party-goers.

At HotSpot people will be able to play sports such as volleyball, badminton and petanque, or even try their hand at skimboarding. There will also be a place for people to have their own BBQ.

For those who simply want to chill out, the bar promise there will be plenty of umbrellas and hammocks on site too.

If you're looking for sand next the river in Wrocław but don't like the beach bar scene, there's always the small stretch of sand that runs by the renovated Bulwar Politechniki Wrocławskiej. It's a delightful and peaceful spot that isn't disturbed by cheesy pop music, and one that numerous Wrocławians enjoy using for a picnic.