Ogień is a new Neapolitan-style pizza joint on Pomorska which, despite a few service hiccups, has real potential to be one of the best pizzerias in Wroclaw.

Ogień should have been fuller on a beautiful Wednesday evening in Wroclaw. We've seen pizza projects like Happy Little Truck's Niezły Dym gain enough popularity to open a sit-down location, wood-fired oven and all, and don't get me started on the Italian extravaganza that is Więzienna Street. So I'll begin by saying that if you're looking for above-average pizza and want a local vibe, I'd be happy to recommend this neat little place on Pomorska and Wąska. 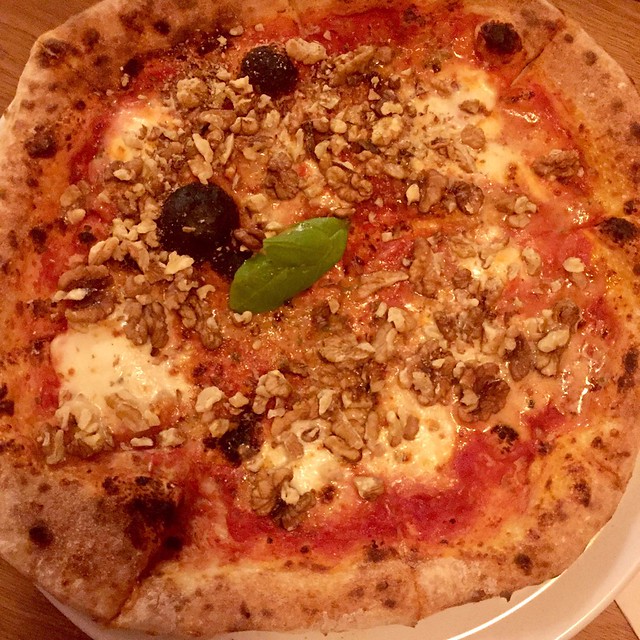 It's certainly endearing to see a new restaurant trying to iron out the kinks in its system, though the joke is often on the customer. It would have been nice to be greeted when we walked in the door, and since there was no sign indicating samoobsługa (self-service), it was only after watching other guests that I cottoned to the fact that I was supposed to order at the bar (and pay upfront). This was more than a bit awkward, especially since the server did not feel compelled to prevent me from making my mistakes.

In general, however, service was polite, and willing to accommodate my rather American assumption that I'd be served table-side. I think Ogień just needs some time to decide if it wants the customer or the server to do the work of ordering: either is fine, but one should be chosen to avoid confusion. Anyhow, the service can always be improved, and I'm hopeful that the Ogień family realizes its guests could feel more at home with some attentive waiting staff.

Let's talk about the food. There's no liquor license as of yet, which did not turn out to be problematic as there was a very refreshing, not-too-sweet liter of lemonade on the menu that I gladly quaffed. We ordered the vegan salad to split, which came undressed. After we understood we were supposed to oil-and-vinegar it ourselves (once again, unexplained by our server – maybe she was just shy), it turned out to be bright and unassuming, with high-quality olives, sun-dried tomatoes, and roasted pepitas. A fresh pepper mill would have been a most welcome touch throughout the whole meal. 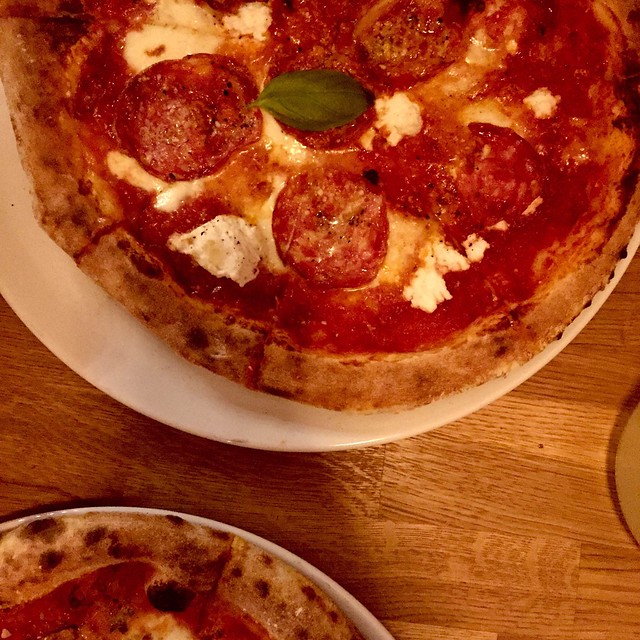 Now, the pizzas. They are really very good, which is just as well as the prices at Ogień are slightly above average at around 25zł per pie (a Margherita is 18zl,1-3zl more than at Pizzeria Si, Niezły Dym or Piec Na Szewskiej). The dough is clearly made by hand and was very fresh, sweet but with the slight tang of natural fermentation. It was airy and chewy, and both of our pizzas came out with those lovely charred bubbles you can only get from a brick oven.

My one critique on all the pizzas would be that the tomato sauce (DOP San Marzano base) could use some seasoning. The Pepe was essentially an elevated pepperoni pizza, with fresh ricotta and Neapolitan salami (broiled to a crisp at 450°C according to the emphatic menu) complementing each other and working in concert with the dough to provide a rich, satisfyingly savory treat. The Gorgo, with its pile of walnuts and salty, gooey cheesy goodness, was gratifying and excellent (it could be a showstopper if drizzled with honey, but that's just this reviewer's opinion).

Give Ogień some time to smooth out its operations, but don't avoid it. It'll be an even better spot once you can get a bottle of cheap Italian wine, and in winter the oven will make the atmosphere utterly cozy. It's a restaurant with real potential to be fun, and I'd love to see it fill up with happy Wroclawian Neapolitans, so tell your friends. The kinks can only be worked out with customers to practice on, and the pizza is already worth being a guinea pig for. I'll be back myself.

Maia is a half-Polish, half-American pastry chef and long distance hiker who has just moved back to Wroclaw after what feels like a lifetime away. She is constantly looking for new things to see, do, and eat - and wants to share her experiences with fellow English-speaking fans of this fantastic city.